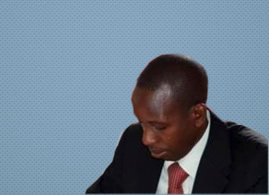 Amon Ashaba Mwiine is an Assistant Lecturer at the School of Women and Gender Studies. He graduated with an MA Gender Studies (MAK) in 2011 and his thesis focused on “Space, Gender and Identity Construction”. He is a PhD holder from at Stellenbosch University, South Africa. His doctoral study focused on the question of Men in Parliament while interrogating the legislative systems that produce gender, power and privilege in politics.

Has experience in teaching and research in Gender mainstreaming, gendered identities and processes of social construction, Men, Masculinities and Development. Has also done research and training in gender and education, Shame, exclusion and how these widen prospects of poverty. Is currently an honorary Research Fellow at the University of Manchester, UK (2013 – 2015), accredited Gender Auditor with UNDP – Uganda.

Other areas of research interest include Masculinities and development, Gender mainstreaming and Political settlement.